By: Editor
In: India
Tagged: Libya 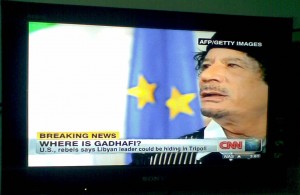 The six-month-old liberation struggle in Libya entered a crucial phase with the rebels taking control of capital Tripoli. This more or less portends the end of the Gaddafi regime, which has been ruling the country for the past 42 years. However, at the time of writing this, there is no word about the whereabouts of Col. Moammer Gaddafi — who has not been seen in public for more than two months. There are unconfirmed reports that his sons have been captured by the rebels. Gaddafi, whom the US calls a “tyrant” and a “dictator”, is wanted by the International Criminal Court (ICC), as are his son Saif al-Islam and Gaddafi’s intelligence chief Abdullah al-Senussi. In June, the ICC had issued warrants against the three on charges of crimes against humanity after the UN Security Council referred the Libyan situation to the ICC in February.

While the situation in Libya continues to be fluid, world leaders have come out welcoming the developments. Britain advised the rebels — who fight under the banner of the National Transitional Council (NTC), which represents Libya’s opposition — not to resort to revenge attacks on Gaddafi loyalists. Barack Obama, President of the United States, which has been at the forefront of providing logistic as well as military support to the rebel forces, said the NTC should “continue to demonstrate the leadership that is necessary to steer the country… avoiding civilian casualties, protecting the institutions of the Libyan state, and pursuing a transition to democracy that is just and inclusive for all of the people of Libya”. South Africa’s reaction was cautious. “The Libyans themselves must be given the chance to decide the future if their country and the future of Gaddafi,” said Nkoana-Mashabane, foreign minister of South Africa. Hugo Chavez, president of Venezuela in his characteristic style said: “Today we are seeing images of the democratic governments of Europe, along with the supposedly democratic government of the United States destroying Tripoli with their bombs… Let’s pray to God for the Libyan people.” Australia’s reaction was predictable: Prime Minister Julia Gillard said: “We continue to call on Colonel Gaddafi to get out of the way, and of course we believe that he should face the international charges that are against him.”

However, the journey from here will not be easy for the Libyan rebels. With the country’s innumerable tribes and clans (close to 140) gearing up to stake a claim in the power pie, it needs to be seen where Libya goes from here.