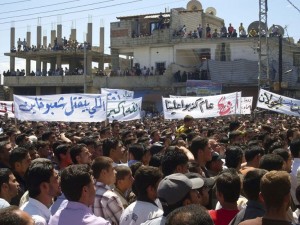 With the fall of the 42-year autocratic regime under Muammar Gaddafi in Libya, all eyes are now on Syria, where pro-reform activists have been fighting for the ouster of president Bashar al-Assad for the past five months. So far, the protesters have succeeded in making the government withdraw a 48-year Emergency Law but their other demands — President Bashar al-Assad to step down, for the ruling Baath Party to allow other political parties, to end extrajudicial killings and torture, equal rights for Syria’s ethnic and religious groups, and broad political freedoms such as freed media, freedom of speech — remains unfulfilled. And therein lies the crux of the problem. With the protests not tapering off and the government putting its foot down, the conflict is likely to escalate.

Unlike Libya’s Gaddafi, al-Assad is no dictator. An ophthalmologist by training, the Syrian leader has been in power for about 11 years now, after inheriting presidency in July 2000, a month after his father Hafez al-Assad, who had been ruling Syria for three decades, died. Some reports say Al-Assad was hesitant to take up the political role, but was coaxed by the Baath party. He was elected to the top body of the Baath party at its first congress in June 2000. In fact the Baath party amended its constitution, scrapping the minimum age limit of 40 to allow al-Assad to run for president. In the election, he was elected with more than 97 per cent votes.

When al-Assad took office, there was widespread optimism that he would usher in the much-awaited political reforms and free the country from the shackles of a tyrannical rule. This was more so, because the new president was well educated and had a modern outlook. However, the hopes were short-lived as al-Assad’s attempts at reforms were fiercely opposed by the old guard – the group of people who were close to his late father and who still enjoyed considerable clout in Damascus. Al-Assad succumbed to their pressure and the promises of reform were broken.

The main thing going against al-Assad is the tyrannical image of his father, under whose rule thousands of opposition party members were imprisoned and tortured under emergency laws implemented. Al-Assad has repealed the draconian law, but the suspicion still lingers on.

So far, the uprising has already claimed 2,200 lives, according to an estimate by the United Nations. Going forward, it remains to be seen how peaceful this agitation remains.