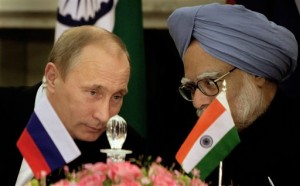 Russian President Vladimir Putin’s visit to India comes at a most inopportune time. New Delhi is witnessing an unprecedented massive protest campaign – mostly led by the city’s University students – against the increasing incidence of rapes in the capital city.

The latest trigger is the gang rape of a 23-year-old para medical student in private bus last week.

As Delhi will likely remain a fortress today with India Gate – the epicentre of the protests – and the adjoining areas out of bounds for normal traffic and as many as nine metro stations — the lifeline of Delhiites — are closed down to prevent more people from joining the protests, the government has changed the venue of the annual meeting between Indian PM and Putin. Now the leaders will meet at PM Manmohan Singh’s residence, rather than at the traditional Hyderabad House, where such high-level bilateral meetings take place.

This is the 13th India-Russia annual summit. On the agenda are defence deals worth about $7 billion, including a $4-billion deal to buy additional Sukhoi 30 MKI fighters equipped with the Brahmos cruise missiles, an Indo-Russian joint venture. Russia accounts for about 60 per cent of India’s military hardware.

Ahead of the visit, the Kremlin said Putin will discuss “concrete steps to further develop strategic partnership” in trade, investment, military and energy policy.

The two countries have been holding annual summits since the signing of the “Declaration of Strategic Partnership between India and the Russian Federation” in October 2000 in New Delhi. According to the October 2000 declaration document, the Prime Minister of India and the President of Russia will hold annual summits on a rotational basis. The last summit was hosted by Russia in December 2011 and Manmohan Singh travelled to Moscow to attend the same.

This year is also being celebrated as the 65th anniversary of the establishment of diplomatic relations between the two countries.

According to a release by the Ministry of External Affairs, government of India, India and Russia share “a multi-dimensional strategic partnership”, spanning the traditional strategic sectors such as defence, nuclear and energy, and emerging areas such as trade & investment, science & technology, culture & tourism and people-to-people contacts.

Both the countries have set a target of increasing the bilateral trade to $20 billion by 2015, from around $9 billion in 2011.