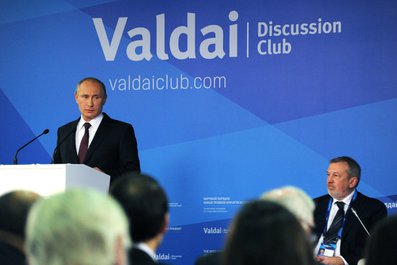 Squarely blaming the US for disrupting the world order by seeking to impose its will on other nations, Russian President Vladimir Putin on Friday warned that new wars will break out if Washington doesn’t learn to respect the interests of other countries.

Putin was speaking on “The World Order: New Rules or a Game without Rules” to a group of political scholars at a meeting of the Valdai International Discussion Club in Sochi, Russia.

The Russian Prez pointed out that the wars in Iraq, Libya and Syria are due to the botched policies of the US. He asked if the US policies in those countries have made the world a better place or a dangerous one.

“A unilateral diktat and imposing one’s own models produces the opposite result. Instead of settling conflicts it leads to their escalation, instead of sovereign and stable states we see the growing spread of chaos, and instead of democracy there is support for a very dubious public ranging from open neo-fascists to Islamic radicals,” Putin said.

He said by meddling in global affairs, the US is making “the same mistake over and over”.

Putin also lashed out at the US for trying to isolate Russia over the Ukrainian crisis. He said the US’ efforts to cast Russia as a danger to the rest of the world by forcing the former’s allies to impose sanctions on Moscow would not succeed.

As a result of the sanctions, Russian banks and state companies have been cut off from foreign capital markets, forcing investors to flee the Russian market.

Putin added: “We know how these decisions were taken and who was applying the pressure. But let me stress that Russia is not going to get all worked up, get offended or come begging at anyone’s door. Russia is a self-sufficient country. We will work within the foreign economic environment that has taken shape, develop domestic production and technology and act more decisively to carry out transformation. Pressure from outside, as has been the case on past occasions, will only consolidate our society, keep us alert and make us concentrate on our main development goals.”

Talking about the “past follies” of the US, Putin said: “They once sponsored Islamic extremist movements to fight the Soviet Union. Those groups got their battle experience in Afghanistan and later gave birth to the Taliban and Al-Qaeda. The West if not supported, at least closed its eyes, and, gave information, political and financial support to international terrorists’ invasion of Russia and the Central Asian region’s countries. Only after horrific terrorist attacks were committed on US soil itself did the United States wake up to the common threat of terrorism. Let me remind you that we were the first country to support the American people back then, the first to react as friends and partners to the terrible tragedy of September 11.”

Putin is not the first Russian leader to criticise the US’ foreign policy. Recently, Russian foreign minister Sergey Lavrov had said in an interview:

“Today, the situation in the world is influenced by extremist and terrorist organisations which have multiplied, primarily, after the 2003 aggression in Iraq, when in the absence of any permission from the United Nations Security Council they started bombing and invading the country. In May 2003, they announced a victory for democracy in that nation, and then, as you know, everything went up in smoke. Now that country is in a position where many have doubts about its ability to preserve its territorial integrity and unity. After that there was Libya, and then Syria, where attempts are being made to do the same as in Iraq and Libya. The ruins of all the “victories” have allowed the development of Al-Qaeda, Jabhat an-Nusra, and now also the Islamic State, which should be fought since they present a threat to everyone…

…They believe that they have a right to punish those countries that act contrary to Washington’s will on certain issues, and to demand from them – and you are absolutely right in that –cooperation on issues of vital importance for the US and their allies. This approach is wrong.”