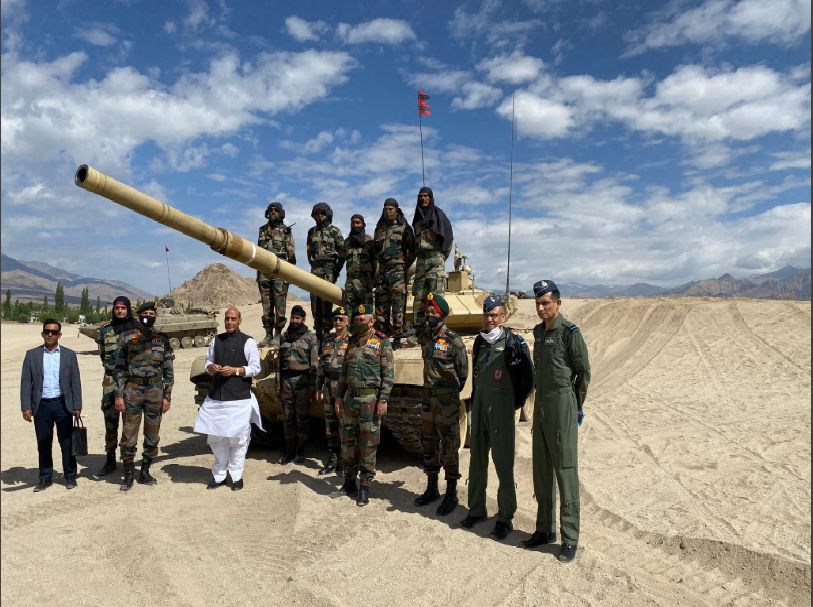 Even as the border tension stand-off between India and China is yet to abate, India’s Defence Minister Rajnath Singh visited the Stakna forward areas in Leh, the capital of Ladakh on Friday.

During his interaction with soldiers at the Lukung post near Pangong Lake, Singh said, “Not an inch of our land can be taken by any power in the world.” He said India is a peace-loving nation but it will never tolerate attempts to hurt its pride by anyone.

“Not an inch of our land can be taken by any power in the world.”

“India is the only country in the world that has given a message of peace to the world. We have never attacked a nation and have never staked claim to any country’s land. India believes in the message – ‘Vasudhaiva Kutumbakam’ (the world is one family),” the defence minister said.

Chief of Defence Staff General Bipin Rawat and Army chief General Manoj Mukund Naravane are accompanying the Indian defence minister, who flew to Ladakh on Friday to reiew the security situation in the region abutting the Line of Actual Control (LAC).

On Saturday, Singh will fly to Jammu & Kashmir and visit forward areas along the Line of Control (LoC) to check preparedness to ward off threats from Pakistan.

The visit by India’s top minister assumes significance as it comes in the wake of China’s provocating postures along the LAC, some of which are aimed at testing India’s patience.

Both sides have already held four rounds of Army commander-level talks to disengage troops of both sides in eastern Ladakh. While the Chinese have withdrawn from most of the areas, they are still staying put in some in a bid to prolong the stand-off.

The defence minister’s Ladakh visit comes two after Prime Minister Narendra Modi made an unscheduled visit on July 3 to interact with the soldiers. The PM also issued a stern warning to China, declaring the “era of expansionism” is over. The seriousness with which the Indian leadership responded to the Chinese aggression on the border did make Beijing nervous, forcing it to halt its misplaced LAC expansion plans.

Things turned ugly after 20 Indian soldiers were killed in an ambush by Chinese troops in Ladakh’s Galwan valley on June 15. In retaliation, Indian Army commandos reportedly neutralised over 150 PLA men.

2020-07-17
Previous Post: Nepal does a China, and Hou!
Next Post: Mysterious blast rips through Beirut, ripples felt across the sea