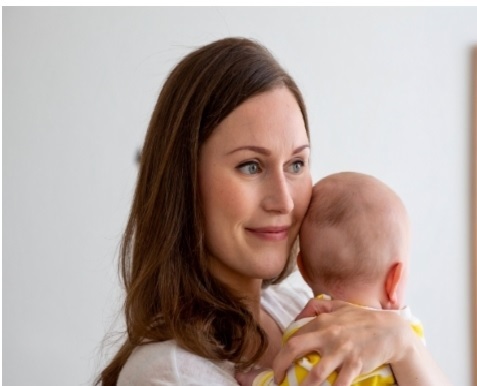 When Finnish transport minister Sanna Mirella Marin takes over as Prime Minister of the Nordic country later this week, she will be the world’s youngest Prime Minister at 34 – younger than Ukrain’s 35 years young premier Oleksiy Honcharuk and New Zealand’s Jacinda Ardern who is 39.

Marin was elected to the top post by her Social Democratic party late on Sunday after its leader, Antti Rinne, quit as PM after his credentials were questioned by one of the coaltion partners.
Now Marin will have to take foward that tenuous centre-left coalition with four other parties, all headed by women, three of whom are under 35.

Rinne, Finland’s first left-wing leader in two decades after the Social Democrats became the single largest party in the April general election, came under attack over a two-week strike by the state-owned postal service in November that spread to other industries, including airline Finnair.

He quit as PM after a coalition partner said they have lost faith in him.

She has an MSC in Administration from University of Tampere and can fluently speak Swedish and English other than her mother tongue Finnish.

On her website, she describes herself as a “mom and politician”. She has been transport and communications minister since June and has a 22-month-old daughter.

An English translation of her personal website says, “The values that are important to me are equality, freedom and global solidarity. These are also the founding values of social democracy. Environmental issues and ecological sustainability are also very important to me.”

While her appointment has triggered much curiousity and interest from across the world, back home even rival parties are celebrating the development.

Former PM Alexander Stubb said the new coalition shows that Finland is a modern and progressive country. “My party is not in government,” he tweeted, “but I rejoice that the leaders of the five parties in government are female,” he added.

2019-12-09
Previous Post: Is Sweden the world’s best country for women?
Next Post: Citizenship law: Are Indian Muslims tilting at windmills?